I have had a most interesting couple of weeks… With some challenges and learning curves, quite a few banter filled nights, some awesome people have provided many an interesting chat. A Jurassic Park car appeared in our car park! This caused no end of excitement! Some fun times held with the bar fridges breaking, with replacement parts coming from Sydney, I have had to utilise buckets, ice and water to keep the beer cool! Yes it did feel a little like a house party! 😉 After a busy night, finally getting rid of everybody, Caledonia played randomly with my music on shuffle to just me and the empty bar :-). I sang along to the whole song :-). I have played a lot of 'tell me your story’s’ and participated in yet more guessing games for home nation. About that home nation of mine, with 'who wants to be a millionaire' on the bar telly most nights, I watched as they asked what country is also known as Caledonia. Scotland of course the right answer, with other options of Spain and Russia, the first contestant passing, the second guessing Spain and getting it incorrect, this situation elicited more than one whaaaat being yelled at the telly! How rude ;-). Perplexed by my inaccurate flag drawn on the wall, sharing this story with a customer, this is now no longer the case! Fixed and accurate, I don't know why I didn't think about the merits of colouring the whole thing in blue and using white paint before… Also asked about Scotland's national anthem, politics has made an appearance in my week with a retired Scottish MEP on a motorbike passing through my doors and a multi country discussion regarding balloting day choices for elections. 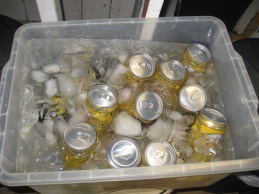 Regarding the onward journey, with some time to myself I finally managed to put the brain into gear and work out a plan. I am leaving here next week. After a journey south to see what this big rock in the middle of nowhere is all about I am then heading to a farm near Perth at the end of September to finish the agricultural work I need to extend my visa. Back to wwoofing, perhaps splitting my time over a few farms and seeing different ways I am looking forward to exploring again :-).

2 thoughts on “Jurassic Park, Ice Buckets and Many a Reminder”