The previous hot day made it difficult to sleep and I was also preoccupied over whether I had made a wrong decision in the East/West debate. Phone playing up again, poor signal and wifi unattainable after 6pm, I was unable to check my emails or even manage a short sentence in response to Dave due to my screen not working properly. Suspecting the same problem that I had in Brisbane, and a bit frustrated, I now think I am going to have to buy a new phone…. I don’t mind being incommunicado, I just need to check my emails regarding the onward journey and book transport!

After not much sleep we headed back to the same site to cut tree stumps shorter and spread mulch. We were told how the land would be replanted with native species and whilst we will not be the group progressing this work, it was good to have a vision in our heads. Mulch down and spread, progress on site was felt and our efforts seem to have been appreciated. 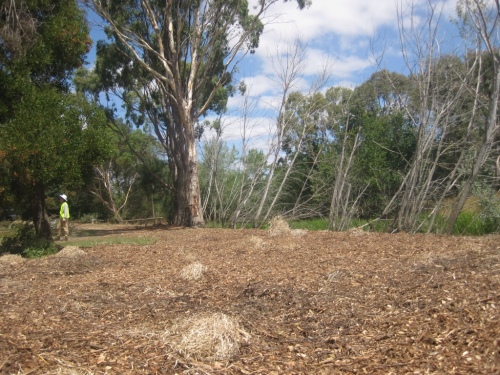 After a pit stop to pick up laundry, we headed into town in search of sushi. Finding the only place a takeaway and wanting to sit, we opted for Chinese. Tasty and satisfying after a hard day’s work. Returning home just in time to see the last 2 sets of Murray beating Federer, a good day was had. Good banter had with my volunteering chums made me content in my decision to stay and camp and then head west and plans are afoot to spend a little time in Adelaide then drive the ocean road back to Melbourne 🙂