I awoke to somewhat of a hangover… Unable to source irn bru and salt and vinegar squares, a burrito and can of coke sorted me out. A slow wander to Rundle Park, I encountered the garden of unearthly delights – host for many of the Adelaide fringe shows. Attempting to avoid all UK acts, I relaxed into the free concert. Alas it was UK day and I was treated to Morgan & Webb, Abandoman – who I had seen in 2010 in Edinburgh and who is apparently now just one man, and the Magnets. Enjoying the magnets the most, the atmosphere in the park was amazing. Reminding me of the Edinburgh Festival but with temperatures peaking at 40 degrees it was a very hot day! 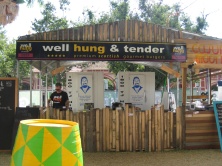 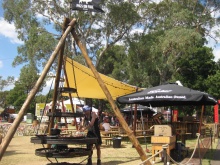 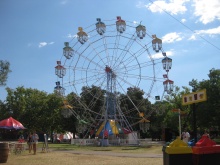 After an evening interlude, me and two of my new Scottish friends tried the free fringe show the hostel was offering – Eastend Cabaret – Notoriously kinky which was brilliant. Catching up with my sister beforehand and my parents after, a pretty awesome day was had. A bond with a roommate over Mt Lofty solidified the awesomeness and I fell asleep having had a good weekend. Having had some sad news from home in the last week, having had such a good time here I am feeling a little guilty. Even though I am far away I am sending hugs and thoughts to all affected xx