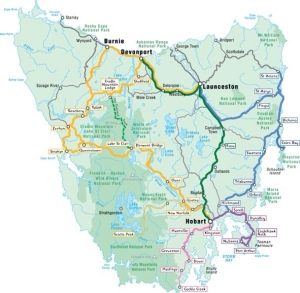 After day 1's introduction, I was ready to start my Tasmanian adventure. Not to be caught out I left the hostel with nearly a full compliment of winter clothes save my newly acquired tasmanian gloves left curled up uselessly in my other jacket. I was doing so well.. A morning wander round Strahan in the rain, encountering sea planes and an ampitheatre with a restaurant and a jet boat, I am sure it would look more beautiful in the sunshine. Given two options for the day, missing the gym and feeling the burn of a good workout I chose the waterfall walk over the river cruise. Accompanied by Ben, Xavier, Kirsten, Nadja, Yo, Masaji and Joyce, walking past a corridor of ferns, with some beautiful colours, heavy rain created little waterfalls. The ground squelchy underfoot, chatting to Ben and Nadja and taking photos a plenty, after crossing a somewhat bouncy bridge (Xavier may just have had a part to play in that!) Montezumo falls rained down on us impressively. Bonding instantly with Ben and Nadja, videos and a group photo captured, despite the rain, it was a brilliant way to spend the day. That old issue of Scottish stereotypes rearing its head, I was asked by our guide about the moors and peat bogs of Scotland. I had to explain that they are not expansive over the entire country…! Powering my way back, feeling my legs hurting, it was good to be exercising. 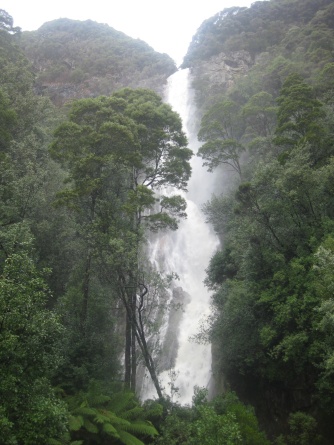 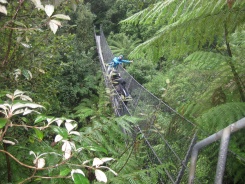 Picking up the other half of the group, we took a late afternoon trip to the originally named Ocean Beach. Amazingly beautiful, there was lots of foam all over the beach from the sea allowing many an interesting photo to be captured. 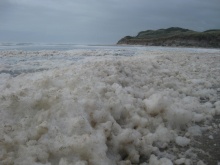 Evening entertainment of the local theatre production – 'The Ship That Never Was' for only $10 in the amphitheatre seen earlier in the morning, it was a girly outing all wrapped up in our blankets. Commandeered by only two actors, reminding me of the ragged trousered philanthropists, they told us the story of the convicts on board the 'Frederick', the last ship built at the convict settlement of Sarah Island in Macquarie Harbour about to set sail for the new prison at Port Arthur. The longest running play in Australia, it has been going for 20 years. Lots of audience participation, our very own Kirsten gained the role of ship parrot. Graduating from a hand puppet to full on parrot costume by the end with squawkings and soakings, the kids from the audience were fantastic. Appreciating some Scottish humour derived from the character of Mr Hoy, using the phrase 'Och no', I was reminded of good times with my corkman buddies. Meeting up with the full tour compliment for dinner, we then headed to the pub. Pool banter of the sporting variety one plays on a table with a cue and not the wet kind you swim in, I turned into Miss paparazzi taking lots of people pictures (I have been a bit heavy on the landscapes of late). Tuneage, dancing Ben, an apparent love for my say 'whaaaat's'?! and a banter filled walk home provided an utterly fantastic evening. 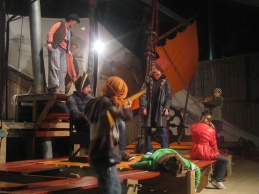 One thought on “The Diary of a Tassie Adventure – Day 2 – Montezumo Waterfalls, Ocean Beach & The Ship That Never Was”