After a breakfast of toast and apricot jam, we were deposited at the beginning of Cataract Gorge. A picturesque, impressive v shaped valley, I was reminded of many a geography lesson. Our walk including some autumnal trees, 30 second timed group photos and carvings in the rocks saying 'McLoven', it was a beautiful stroll in the morning sunshine. Rendezvousing with another van at Epping Forest, it was hugs and goodbyes for Masa, Yo, Nadja, Ben, Anna, Alysia and Christine. 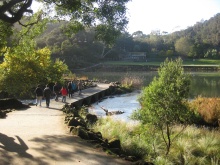 Our group complement down to 6, we began our journey to Tasmania's eastern coast. An initial drive through steep mountains above the trees, the land then started to flatten out. A break in the trees allowing us to spy the Tasman Sea, we reached the Bay of Fires (which I hear was once the second best beach in the world) for lunch. So named due to the smoke from aboriginal fires, so peaceful and such a contrast from yesterday us girls and Markus bonded over jumping pictures.

Swinging past Grant's point, Emma becoming lookout telepathic, we then ended up at the iron house brewery. With a view to knock your socks off, we had a tasting experience of lagers, porters, wheat beers and pale ales. 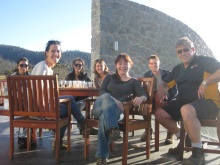 Some more foot shots, jumping pictures and blowholes, we arrived into Bicheno. A truly spectacular landscape, with the sun beginning to set, my camera eventually died from overexposure!! 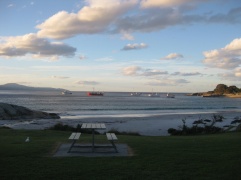 Our cabin style hostel like something out of North America, the girls in one room and Markus sharing a 6 bed dorm with himself, we enjoyed some spag bol Peter style. My playing cards getting their first outing from the backpack in 4 months, I taught my new friends '7's' and learnt the German 'Mau' (similar to uno). Nice to chill for a couple of hours, crawling into bed at an unprecedented 21.19, our room turned slumber party and through many a giggle we relived all the funny moments from the day. What a day! Some truly awesome sights, lots and lots of laughs and new friendships have been found :-).

After so much amazingness yesterday, I didn't think anything could top it… I genuinely have never laughed more in one 15 hour time period than I did today… Here be a list to remember all the funny moments that made us laugh, for those that were there, for others gone away to share the laughter and for others dropping by just to have a giggle at our stupidness:

2. In the Bay of Fires with a peaceful and idyllic feeling it kind of felt like you were on a small island in the middle of the ocean. I said that out loud and Emma said “you are…!” In my defence I meant a teeny tiny tropical one far far away from a big land mass!

3. Sharing tattoo stories Emma told us that she knew a boy who had got drunk in Thailand and decided the most appropriate thing to tattoo on his chest was “Life is too short. Party naked!”. He was 19. That is a lot of naked partying still to do!

4. Stopping at a petrol station our guide informed us that the man in front was 'smuggling drugs in the crack.' Those of us at the back of the bus expecting to see bulging pockets got a bit of a shock when we saw an overweight man with his trousers halfway down his legs…. This was not pretty. Bizarrely enough this situation reemerged the day after with a woman in her garden… I do not want the things happen in 3's rule to be applicable here.

5. Stopping off at a beach viewpoint, I was asked if I wanted to see a shark?! Expecting one in the water, when I turned round there was actually 2 dead small sharks on the beach. Emily asking Markus to touch one, him not too keen to touch a dead animal, especially one that could potentially not be dead, she was met with the reply “would you play with dead bodies…!!” Hahaha. Sooo funny

6. Back on the road, Peter said we were driving to the white stuff on top of the mountain. Unable to see anything, I replied 'what, the clouds?!' They all laughed at me.

7. Emily, thinking about our itinerary, asked Peter 'weren't we supposed to have lunch in epic forest'. He replied “that's where we changed drivers and it's not epic, it's epping.” I don't even know what would make a forest epic…

8. Beer tasting, Emily asking Emma to take a picture of her and Kirsten using the phrase 'of the two of us” Emma replied “2 being you and the beer?” Hehehe

10. Markus playing papparazzi, snapping Peter, our guide hunched over the steering wheel looking like he had just robbed a bank. Sharing the picture, asking 'do you know this man?' the whole bus erupted into laughter.

11. In Bicheno, walking back up from the water's edge Markus told me he had been to take a picture of a Tasmanian police car. I asked what it looked like. It genuinely took a good few minutes before either of us realised he could just show me the picture.

12. After seeing the blowhole (a slab of rock with a huge stone next to a hole where water spurts out). A nice geographic feature I hear you say. Perhaps you want to know how high the water gets? Or how much is blown through it? Or maybe the pressure of the water? Nope, Emily's first question was if anybody had ever been crushed by the stone beside it…!

12. Finding each other on facebook, Emily looking for me but not on the first page of results I responded that she would need to go to 'see more' as I'm usually on page 3 or 4. Emma turns round and says “you are Jane Seymour?!” This was quite possibly one of the funniest things I have ever been asked. I feel like changing my name to Jane See More.

13. Checking the weather and sunrise times for Bicheno I was informed that I can get a willy weather app!!! Whaaaat?! Do not ask me why Australia thinks it is ok to have a website called willyweather.com.au

14. Renowned for my 'whaaat's' on tour, having a crazy what what situation, I asked the girls for help in remembering what madness had triggered this reaction. Emily told me she remembered the what what and Kirsten no word of a lie then said 'the what?' I still do not know what happened to illicit a double what situation…

2 thoughts on “The Diary of a Tassie Adventure – Day 4 – Cataract Gorge, Bay of Fires & Bicheno”