Into my second week of wwoofing I have had yet another interesting, banter filled week… Those who know me well will be surprised to hear that I am successfully managing 6am starts! Uni friends will know that as somewhat nocturnal, sometimes I would just be going to sleep at this time…! Waking in the dark under a blanket of stars, a tap of the shoes to make sure no nasties have crawled in starts my day. The sun creeping over the horizon by 6.45, the temperature reaching at least 20 degrees before I leave the house, sunscreen is required by the time I start work at 7.30! Who says it's winter?!

Somewhat of a zucchini filled week, I have planted zucchini seeds of the crowbar and hummer variety (who knew that zucchinni's were named after tools and cars…?!), picked zucchinni's, cleaned zucchinni's, which I actually found very therapeutic, and then made pizza with zucchinni, pineapple and olives. It was actually amazing. See a theme yet?! Coming from a person that used to hate courgettes this is quite a turnaround ;-). 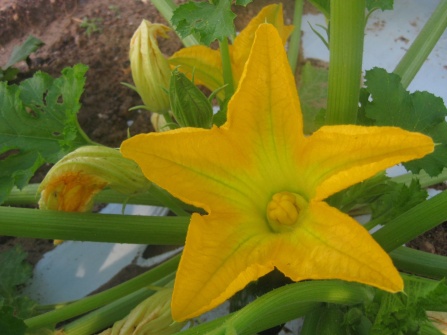 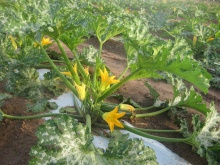 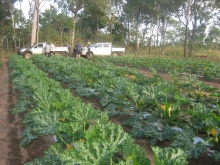 Embracing the wwoof culture, this week I have learnt how to make concrete, found a love for the drop saw (it is now my favourite tool), acquired better aim at drilling, helped hang a gate and built two fences. One of my favourite tasks is to spread hay around self fertilised banana trees. Now wholeheartedly genuinely hating carrying hay, I end up covered in the delightfully sharp stuff with the soil and dust in it providing me with a tan approximately 20 shades darker!!! An impressive tan for me, this requires soap and water and the power of a shower to remove! 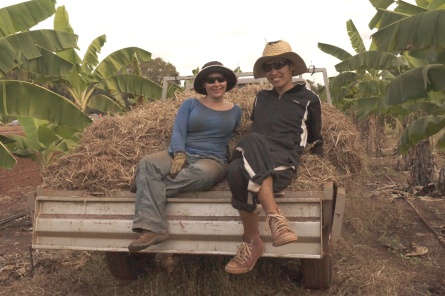 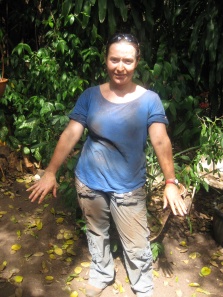 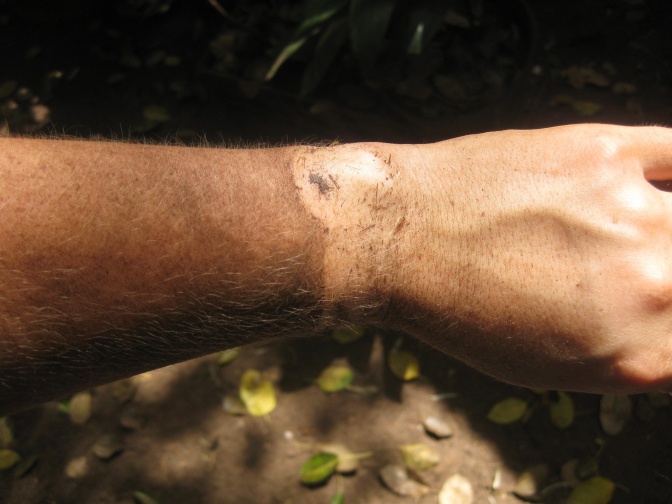 The week not yet done, sunday's events undoubtedly made it one of the most interesting and one of my favourite days so far!! Not starting in the best of moods, picking zucchinni's, taking charge of fencing clips and a tuna mayo sandwich helped me perk up and find my happy :-). My change of mood seemingly rubbing off on others, we enjoyed banter and good chat whilst we worked. After chain mesh rolling, some impromptu sprinting ended up in some sore hands for Go. Apparently wanting to do himself further damage, he then got them caught in chain mesh! Fearing I was about to have to turn first aider, all was thankfully ok! After some legendary unexpected say whaaaat's not said by me, whilst clipping, I had a rainbow pointed out to me. Having made decisions the night before, I liked that this appeared at that juncture. Perhaps exerting myself too hard, having waves of feeling like I was going to faint, juice, cookies, iced tea, nuts and an orange later, thankfully the working day was over. Feeling better by the time I got home, we arrived back to find that the dogs were missing… Out on the randan, with snakes, wild pigs and crocodiles in the nearby area, it was a stressful couple of hours for my host family. Taking charge of dinner, teaching Go how to make pizza, the dogs thankfully returned safely, some wine and rum were called for!! Round 2 of girls v boys at pool, an incredibly funny boy high 5 due to Go's sore hands, good banter and good company contributed to an amazing evening! Catching a bit of eurovision before bed, I felt a teeny tiny bit closer to home… What a day!

Finishing the week feeling a little bit sore but loving being outside, enjoying learning and being in a new place acquiring new skills, I do believe I have the beginnings of a 'when I was your age' tale… 🙂

The first territory I've visited where so far I've not heard a Scottish accent, there have been some interesting moments…!

-> Writing my journal, I genuinely used the words brekkie and arvo without thinking about it… I am not sure what's happening to me… Could someone please send some Scottish people in my direction?!

-> I now hear myself talking when I speak. It doesn't sound like me… I am unable to tell if it sounds Scottish or not… Is this normal when surrounded by people that don't speak with your accent?!

-> I am somewhat impressed with my host. Others asking if I knew bands from England he responded 'ah but Jane's not from England'. As a result Northern Territory is currently winning in the knowledge of the Scotland/GB/UK geography challenge!

-> Fearing Australia was starting to steal me away, after a lovely phonecall with mummy and poppa Wilson, I uttered the words 'I cann'y believe it'. Amazing! Australia 0 – Scotland 1! 🙂

My crazy week in snapshots

Experiencing yet more crazy, just some of the notable events include:

-> Reversing and using a JCB. Searching for tree roots and breaking up the ground it genuinely felt like it could have been a game on the crystal maze or the cube! I think I did ok 🙂

-> I have been eating spam sandwiches. I genuinely have not had spam in years. It reminds me of home 🙂

-> Tea breaks have allowed me to find a love for the biscuits branded 'nice'. They are particularly good kept in the freezer :-).

-> Seeing more cats than dogs in the last 5 1/2 months, I most definitely thought I was a cat person. Two weeks at this farm has made me a dog person. Some amazing dogs, Mr T has become my new best friend.

-> Asked by our host if we had ever hung a gate before with both Go and I responding no he replied, good, that makes 3 of us!! It was so funny!

-> On Monday I stood outside watching the pink sunrise, checking in with the sister. Watching a wallaby hop by with the animals waking up around me, it was an awesome start to my day.

-> Showing Go my penguin picture taken in Penguin he asked if it was a real penguin?! A ha ha. Can you imagine how scary that would be if it was?! It must have been about 10 feet tall…!

-> I have had to explain what a straw poll is, been laughed at for calling a 'dooner' a duvet and had to outline what cowboy time is!

-> And one last one for those this side of the pond, a ridiculous amount of banter over ai, ai ai's and other alphabetic letters; 'what do you reckon's' and 're what's'; 24 degrees, fencing vs kendo, shoe glue foot pictures, the delightfully quiet guinea fowl, very high high 5's and finger 5's and some crazy edible fish food!