Northern Territory supposedly in the 'dry' season, for the last couple of weeks the weather has not played ball… Witnessing a fair few thunder and lightning storms, an impressive amount of rain and temperatures warmer than they should be, this week saw a change in the weather. What the farmers have been waiting for, with some cooler nights on the cards, my long trousers and a long sleeved top getting an airing on Friday night, it was the first night I started off with my duvet rather than pulling it over me at 5am! Somewhat successfully influencing, my host actually said duvet rather than dooner that night! Scotland 2 – Australia 0 :-). Managing to sleep a little earlier, miraculously falling asleep at 10, yes you heard right, 10pm on a Saturday, it joins a handful of night's asleep before 12 since I left my relatives in January! Also the longest I have slept without ear plugs since leaving the UK somewhat ironically, it is perhaps the place where something is most likely to crawl in my ear…!

Back on the farm, repeating many of the same tasks completed in previous weeks, I can now add planting pumpkin and tomatoes and welding to my repertoire. I love the colourfulness of Jarrahdale pumpkin seeds. Somewhat weird, gaining a random new skill I seem to have become new calf predictor! Hearing a different moo from the cows I declared 'that's a cow giving birth!' Turns out I was right! I am not sure whether this is a useful skill or not…?! I am quite impressed with myself though I fear it is coincidence! 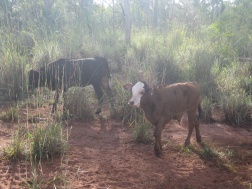 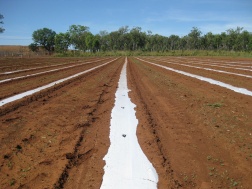 More zucchini’s, learning how to pick them just at the right time, I learnt to look for fat ends as well as length! I am not sure if this rule is universally applicable… 😉 Laying plastic for growing vegetables fast becoming one of my favourite times of day, a bit filthy from the day before and having not managed laundry, Monday's lesson was a sore one…. A word of warning – don't wear a shirt that you haven't worn since you left the UK. Firing out my checked shirt, I was immediately the proud owner of two new bites on my elbow and some itchy arms! Informed that I have probably had something living in it in that time (!) and told that the juice from a fresh lime is good for taking away the itch, I at least learnt some lessons with my morning!

Somewhat of a banana filled week I learnt of the usefulness of bananas for twitchy eyes (it is a potassium deficiency thing apparently). Mulching the farm's banana trees, shown the banana bud (who knew they were purple?! And had flowers?!) I learnt that well fertilised trees produce nine hands of bananas and that the bigger the banana the better! Each banana tree only providing one bunch of bananas, there are suckers (google it! It's a plant!) on hand to shoot up and replace it! Given a ripe and ready said banana, it very sweet in comparison to the shop bought ones available in supermarkets back home, still not sure if I liked it, my host evidently disagreeing, he proceeded to eat nine bananas in a row…! Nine bananas?! It was actual madness! Maybe I just have to get used to them :-). 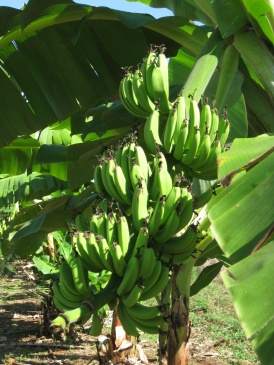 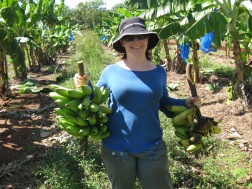 Back at the ranch with some downtime, with a multitude of films and telly on offer, I have managed to catch some 'unseens'. Delving into a Scrubs box set, Dr Cox has become my favourite character. With not quite enough time to manage a lot of it, just don't tell me how it ends! On my host's recommendation we have also been watching Australian comedy series ‘Lano & Woodley‘. With a ridiculously catchy theme tune of 'I got a feeling, a bit of an inkling' there are some genuinely hilarious moments. I have laughed a lot. Particularly appreciating a reference to Robert Scott and the Antarctic, preempting the 'I am just going for a walk' quote with some cupboard humour and a 'whaaat' from them, I have fair enjoyed it!

My week also containing some new edible achievements, I can now say I have tried crab mornay and golden snapper. They were actually amazing! Some personal achievements also, with a bit of an unexpected nudge I think I have managed to put some recent events to rest. Feeling motivated, needing to stretch, with space in my room, I also finally managed to achieve some yoga this week. My first attempt since Melbourne, able to get into the zone for an hour, I stretched myself through six rounds of sun salutations and some standing poses including ardha chandrasana (half moon pose). Talking about moons, on saturday we had the pleasure of a full moon. Creeping over the horizon, reflecting the ground's colouring, it was a beautifully coloured red! Amazing but hiding behind the trees – it was hard to take a good picture. Also seeing some amazing sunrises and sunsets, I was able to snap the following on the same day! 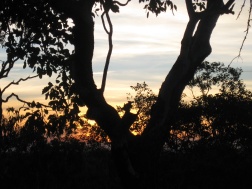 A week of many reminders, losing the 'game' I thought of those in Melbourne; Pink Floyd made me think of my family; french plaits and onward travel destinations making me think of one of my besties, my tartan earrings were in purposefully on Sunday 26th with thoughts headed in the direction of Scotland.

With a plan to reunite with Adelaide friend Lisa in Darwin at the beginning of June, after deciding to leave my current wwoof host when I go to see her, this week I have found a new host for afterwards. Staying in Northern Territory but further south on a zucchini farm, I am looking forward to seeing a new place :-). Feeling that perhaps it is good to split your time over different areas and see more places, this decision was yet another one borne out of instinct. We will see what happens :-).