A shorter working week due to the impending Darwin adventuring, my last couple of days held tasks of planting capsicums (peppers to the UK aboding) and cabbage, plastic laying, a lot of weeding, hole digging for irrigation and bagging bananas to stop moths eating them. My work clothes certainly worn well here, I also had to moonlight as a seamstress in order to avoid some interesting sunburn shapes!

Banter once again had out of working hours, this week saw another visit to Florence Falls in Litchfield Park. The sun setting at six thirty our host suggesting we leave at five, I asked “won't it be dark?!” Somewhat sceptical, I was the receiver of a “what's the problem with swimming in the dark?” Obviously thinking bugs and of potential dangerous animal encounters, I then got a” You have the Loch Ness Monster in Scotland!” Good old Nessie rearing her head in Australia, surely not ;-)! Thinking how to word my reply I responded with “Yes we do. But I'm pretty sure it's not real, probably wouldn't eat me or kill me whilst something here might!” Got to love these reminders of the homeland :-). Turns out it was all good, still light for quite a while and a deep rock pool gave me and Go a chance to try and master a jumping shot! Somewhat unsuccessful in our endeavours to catch a good shot of this on camera, we taught Go how to float instead!

Missing Scotland on Friday, Dougie MacLean's Caledonia in my head, thinking about the lyrics I realised how applicable the words were to my journey. Phoning the Wilson clan, I learnt that my sister had been singing Caledonia herself that morning. It also having significance for others on that day, I liked how the stars aligned around the world that day :-). Receiving messages from the homeland before I went to sleep, waking up to another cocophany of messages and emails in the morning, lying in my bed reading them before getting up, they brought a smile to my face to start the day. Thank you for these messages :-).

My last working day being sunday, I found inspiration in more than one place! Shown writing by my host's sister, Natasha Thompson, her poem 'bushy conditions' for which she won a prize for, I could feel exactly how she felt when she wrote it. Reading her writing makes me want to write. In the evening, gunning for a good sunset picture, taken to a good spot, taking novelty pictures, Go balanced on one leg with his arms out. A brilliant picture, I have now been inspired to achieve sunset yoga pictures in different poses. Might just need the self timer for that one! A last supper of pizza, cake pops and a Lano & Woodley marathon, I repacked my backpack with a view to lessening the load in Darwin! Crawling into bed at an ungodly hour, I reflected on the last couple of weeks. It doesn't feel like i've been here for a month. Achieving a lot, in more ways than one, I have some amazing memories to take with me on the next step of the journey… 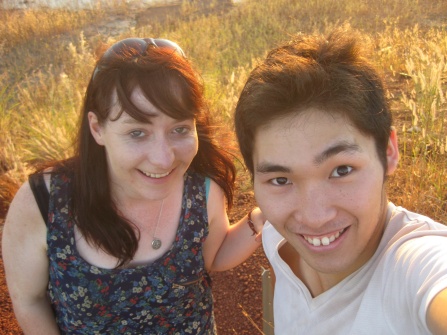 Banter as always, some craziness that should not be forgotten :-).

->This week I had chips made from carrots! Along with pumpkin and potato they were amazing! Having cut some of these and sprinkled the oil, I will take a third of the credit! Yummy.

-> On Wednesday, with Dave saying that he had noticed I had a habit of leaving cupboard doors open, I decided to take this to a whole new level of annoying him by opening EVERY single cupboard and drawer in the kitchen!! Hehehe. Childish, yes. Funny, yes! He laughed. A lot 🙂

-> This week I was asked if we have mountains in Scotland, asked why it was hard to find vegetables in Scotland and if we had arranged marriages in Scotland. Seeing a Scottish Adelaide friend's fb status I noted that someone had said to her 'you sound quite Irish. You must live near the Scotland/Ireland border! This made me laugh. They would be a bit wet wouldn't they?! I love being asked about Scotland now 🙂

-> I don't understand why we call it butternut squash and the Australians call it butternut pumpkin… Can we get pumpkin in the supermarket that is not orange?! I genuinely can't remember and my sources in the UK are not sure. I am quite liking it I have to say 🙂

-> I attempted to make Cake Pops (small round individual 'cakes' made out of Oreo cookies, cream cheese and chocolate for those who have not had the pleasure)! Only part of the decorating process last time and not the making of, I didn't know how to get them to stay on the stick… Don't ask me why I didn't think to source an answer to this in my confusion…! Coating the pops in timtams and then making a timtam cake pop with the leftover timtams and coating that one in coconut and cherries it tasted amazing!!!

-> This week I watched Red Dog. Inspired by a true story and one of Australia's family movies, well shot, using the light from the sun and the colour yellow, it showed off Australia's scenery well. Different, with a good story, I liked it a lot. Loving the soundtrack in particular, I will need to find that and the Red Dog statue on the road to Dampier when I eventually get to the west coast!!!

-> On Saturday after bbqing under the stars the night saw another round of girls v boys pool. The boys victory dance and high 5's when they thought they had won was hilarious. They then potted the white. Me and Theresa genuinely jumped and cheered. Somewhat reminiscent of the friends episode when they are drawing high cards and both thinking they have won it was amazingly funny 🙂

-> On Thursday, the ute out of service depositing freshly picked zucchini’s in Darwin, me and Go had a mini walking adventure on the farm whilst we worked! Our day involving cows trying to eat me, digging, hiding in the grass, fence clambering, finding ourselves in the cow paddock, climbing back over the fence to escape from said cows, Go scaring the cows away, a tractor and lots of pictures taken to mark the events, it was a very entertaining day 🙂 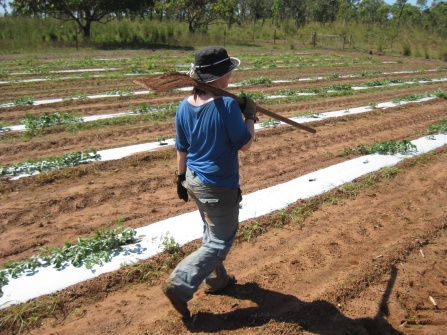 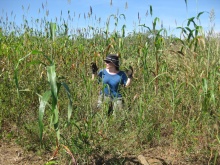 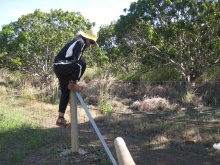