A red full moon spied in Batchelor, Katherine's equivalent is orange! Spending a lot of time this week looking at the sky, some through a telescope, I have gained a new respect for the moon. Waiting later every night to marvel at this phenomenon, I learnt that the moon appears approximately fifty minutes later every night! 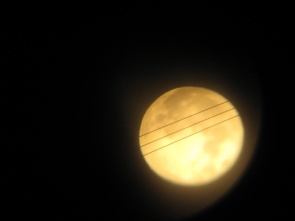 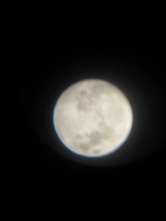 The unplayed list down to 1383 songs, sometimes just wanting to hear something familiar, this week has been the choice of the shuffle. There is something quite nice about 'Lovely day' being played randomly on a lovely day and something quite surreal about a Christmas song playing when walking a zucchini field in glorious sunshine! Mads Langer and 'Better Place' and the enemy's 'You're not alone' have become new favourites and Passenger's 'Feather on the Clyde' one of my favourite songs ever. This song evokes happy Glasgow memories.

This week alongside regular picking duties, the girls and I participated in a plant spraying round robin! Ferrying water to the fields using the ute, a hose and a box with a hundred litre capacity, switching every couple of hours, this was the true definition of teamwork! Removing powdery mildew from zucchini plants, I am pretty sure me and the other girls here will be a group of only a few who can say they did that whilst backpacking round Australia! 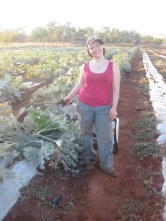 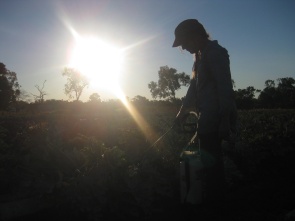 Taught the way Japanese words are made up this week (ten derivatives of A, E I, O and U), it has been very helpful to know in explaining sounds of english words and for writing my own Japanese dictionary :-). New French wwoofers arriving, the girls keen to know some words before they arrived, I was also able to add french teacher to my list of roles this week! Quite a different sounding language to Japanese, a teaching of 'je m'appele' reminded me of a certain friends episode (and of my dad laughing at it!) where Joey tries to speak French…! Ji ma pell ;-).

Perhaps backpacker instinct kicking in, I have had itchy feet all week. My brain, unable to decide between what it 'should' do and what it 'wanted' to do, I toyed between the west (the lure of a state not travelled), the east (perhaps easiest to find work) and the south (seemed most sensible from Darwin with a stop off at Uluru). Helped along the way by my friend Ally, some jelly beans and my map, this decision was made for me when I was offered a job on Tuesday! On the road in the direction of Alice Springs, earning some actual dollars, being a yes woman open to seeing what my future holds, in a couple of days, it is south that I go!