From Nimbin we decide to head back towards Gosford to restock on some oil. Raining and not really feeling like assembling a tent at 7pm we decide just to keep going and drive it all in one go. Back on a road we've already driven at Coffs Harbour, we use a cheeky free wifi stop in McDonald's and I attain two mosquito bites for the pleasure… Ben gets nothing!

It gets progressively darker. We stop in at Coolongolook Roadhouse (now that's a mouthful and a half!) and Ben genuinely manages to lock the keys in the car for the second time! Having had the pleasure of crawling under the car last time to cut the spare keys off their cable tie, it is now Ben's turn to find them ;-). Successfully opened, back in the car, I switch from channel to channel on the radio. We hear a man and a woman talking with a very spooky background being set. Called 'foreign bodies' it totally freaks me out but Ben loves it! Letting the driver choice win, I put my headphones in. I use the time to listen to some music and manage to get into the 'blogging zone'… :-). With a new phone (that is already driving me nuts…!) I check in with the world. Txts from two of my friends make me think of Glasgow. Talking to them makes me miss Scotland a little bit… 😉

Finishing my 'back on the farm' blog, I pull out my headphones and look at Ben. I can tell something is wrong. He tells me the car is not quite right… We shudder to a stop. We use the last of our oil and fuel up. We drive past a sign telling us we are reaching the last fuel stop on the highway. I ask if we should put some diesel in the car… Also how many litres we need to get us there…? I get an x equation out to try and work this out (my standard grade maths teacher would be proud!) We work out we have enough. We drive past the sign marked 'exit' without buying any diesel and choose our fate… We drive maybe six minutes along the highway and come to a pretty abrupt halt…. “Are you serious?!” is uttered out my mouth. We only have twenty litres of unfiltered oil left in the trailer. It is 1am, we're stuck on the highway, it's raining, it's cold and we're getting tired. Ben pours it in unfiltered then bleeds the lines. A most scary thing to do on the highway with big trucks passing you at significant speed… The car starting, all being well we begin our journey again. Ben is sure we didn't run out; that there is oil left… A reasoned discussion later we conclude it is an oil filter problem. I love how this road trip is teaching me all about cars and mechanics! Learning a lot! Unfortunately, during this discussion, Ben manages to miss the right exit…! Bless him. A u turn later we roll in just after 2am… It was actually amazing to lie down on a bed with a doona (duvet for the uk equivalent 😉 ).

We spend a couple of days in Gosford relaxing. We head into Sydney and wander. I take Ben to his first wagamama experience. Topical in the news in Australia, I get asked by two schoolgirls to do a survey on violence, alcohol and shorter licensing laws. They asked the wrong person ;-). Studying social policy, I could have written them quite a lot! I manage to restrain myself ;-). We manage to catch a few movies whilst here :-). Twelve years a slave and the Great Gastby. Actually loved the Great Gatsby. Especially the soundtrack. A little bit underwhelmed by twelve years a slave though, maybe it is the oscar buzz that surrounded it that contributed? A little bit long perhaps though I did love Brad Pitt's character in it :-).

Reorganised and refuelled, on my list for a fair wee while, I put forward the notion of a next stop of Canberra. Ben happy with that plan, we head out on the Cumberland Highway. Not a sausage in sight but there is much traffic… We pass through the Southern Highlands. Past a sign telling us Goulburn was the first inland city in Australia then stop in at the 'big merino'. Like the big banana this is one of Australia's 'big things', and is a pretty sizable sheep named after the wool it produces. You are able to look through its eyes. Its view is of Coles and Bunnings! Perhaps better to see it rather than be lamb chops within it ;-). We get five out for some duck and fire sign related banter. We drive through a pretty impressive u shaped valley. Sparking some chat about glaciers, we stop at Weereewa lookout and make a picture. These Europeans are rubbing off on me – I now say 'make a picture' rather than 'take a picture' ;-). 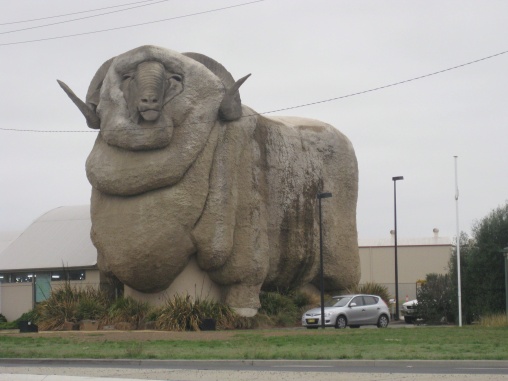 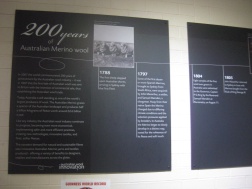 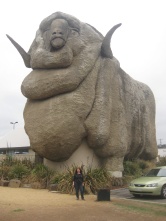 We cross the border and arrive into Australian Capital Territory!!! Another Territory down, I get quite excited about this :-). We do our usual campground phone around for the cheapest option. Alivio Tourist Park wins this game :-). We arrive and having bought a new tent in Aldi for $50 after breaking the pole of the last tent, spend time assembling it. The sky remains orange after sunset. Unsure at first if attributable to the light from bushfires or red ground, it was the result of light emanating from the many streetlights surrounding us. We make dinner. I manage to drop the entire pan of spaghetti straining the water off… A quick, cheeky possum has a nibble before I can clear it up. For it is an offence to feed a native animal in Australia. Much cuteness though, and the closest Ben has ever seen one. Canberra a little bit colder then previous places visited I bed down with my hoody and sleeping bag for comfort hoping there will be sunshine tomorrow… 🙂