Day 3 of the road trip involves wine tasting in the Margaret River region. After a picture to remind George where he slept, he is in my bag the whole day and there never seems a good moment to get him out… Plus there is wine drinking to be done…! A chess board offers the best and only opportunity. Sorry George. Hot Samoan boys provide some alternative banter. We sample a number of white and red and one rose wines. I learn enough about Chardonnay to never ever drink it again.. I learn that dry wines have less than 6g of sugar and dessert wines, more than 120g; that port is called fortified wine in Australia. The last vineyard we visit, Windance, is my favourite. The owner is an actual legend. I meet a couple who are English and whose son had a show in the Edinburgh festival this year. I think about my perception of the area before arriving. It is exactly as I pictured it. I did wine tasting when I was in South Australia. I look at Margaret River in a completely different way. Time spent grafting grapevines and working on farms makes me think how long it must take to pick the grapes. Appreciate how much work has gone into the production. I feel bad for not letting George see more but I roll into bed having had an awesome day :-). 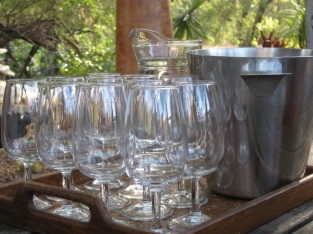 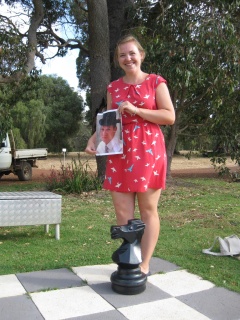 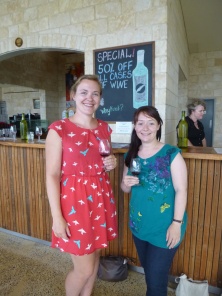 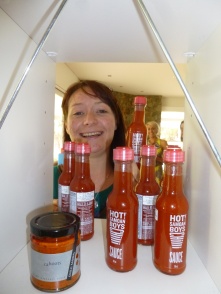 The next day begins wet and windy. We let George out to see Woolworths and his first christmas tree. He visits the Margaret River Chocolate Factory. We go George crazy in a place called Cowaramup. Novelty cows and the offer of novelty pictures… An opportunity not to be missed ;-). We follow Caves Road south. Originally named as there are many caves on this road. We decide George should visit Lake Cave and Jewel Cave. He becomes a caver and joins us on our journey down many steps into the depths of stalagmites, stalagtites, shawls, straws and columns. We end the day in Cape Leeuin (on the other further south bit of western australia that sticks out). Marking the coast it has another lighthouse. I learn each lighthouse in Australia has its own individual signal and hear the story of SS Pericles. Very windy, I decide a picture at the top is not in George's best interests… We take him to sea level where the Southern and Indian oceans converge. I look in the direction of Antarctica. It is a place I very much hope to get to one day. By the end of day 4 George is looking a little bit worse for wear. I laughed at a woman on day one who said we should have laminated him… She was right…! We stay in Augusta's YHA. A nice building and free wifi leave me feeling impressed with this hostel even if it does not deliver me the best night's sleep. George on the other hand sleeps soundly in my bag ;-). 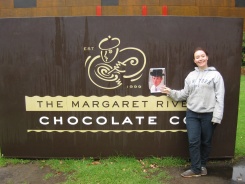 ps just in case you missed it, I enclose the introduction to this madness in part one 🙂

One thought on “What George Did Next…”