I got back in the car after my yoga class. I had had a bit of a stressful morning. I looked at Ben and asked him if I seemed calm. He got very confused by this question and thought I had asked 'am I Pam' or 'am I ham…' Crazy Belgians ;-). He told me he was ready to leave Byron and wanted to go to Nimbin. Renowned for being an alternative, easy going hippie town, and knowing there was a market two days later (I have a thing for markets… Perhaps due to picture and cheap food opportunities) I was happy to roll with this. Until he said the words 'I want to stay on granny's farm'… Maybe it's just me, or remembering playing granny's garden on the BBC computers at school and the memory of the cackling witch in the corner of the screen if you lost living on but these words did not fill me with the happiness that I'm sure they should…

With some trepidation we headed on our way. The journey there took us progressively nearer towards big, grey rain filled clouds. It looked like we were going to be able to test how waterproof the tent is… Passing Possum creek road, goats having sex and a cow with an interesting eye, we were welcomed into Nimbin by a love heart… Aww. Arriving into Granny's farm in the dark and the heaviest rain encountered yet, met with some advice from a tree, we assembled the tent with Ben fashioning some impressive tarp work for shelter. We wandered Nimbin's Main Street in the dark. Many people lining the street, hearing the musical tones of a drum circle, we tried out the local pub. Bottles of NZ summer on offer for $3.50, we gave it a whack… Not the best I have to say… I ended up on cider and Ben on Coopers. Much better :-). With an interesting band providing entertainment, singing about Satan, we watched a drunk aboriginal man dancing, an English boy doing the two step and an older lady flow about the floor to the same song! Eclectic ;-). 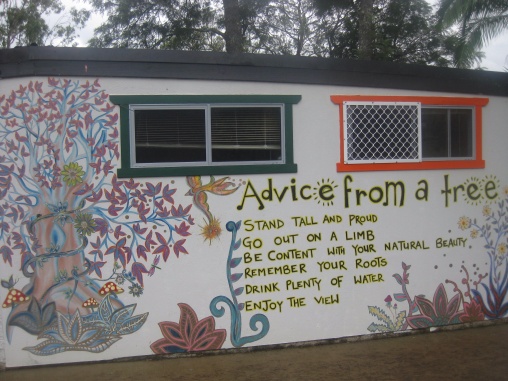 Woken in darkness the next morning, working out why, it appeared to be the result of a very noisy rooster… All I know is that if it is still dark it is most definitely not time to get up yet…! My first thought, 'I don't know whose idea is was to stay on a camp site with farm in the name…' I know exactly whose idea it was… ;-). Genuinely, me and Ben then both said at the same time 'why hasn't a backpacker killed the rooster yet…?!' This of course leading to pondering as to whether it did actually happen with regularity and what number of rooster this perhaps was on the farm…!!! Falling back to sleep, ducks waking us next, one waddling its way near the tent, to me it did not even look like a duck… Met with a 'what on earth is that?!' awakened into civilisation, crawling out of the tent I was then genuinely met with the biggest turkey I have ever seen in my life!!! It was huge. And very very noisy. It should hide at Christmas…! Got to love noisy farm animals in the morning ;-).

After one of the better showers I've had, we went driving about the region, winding through the hills and mountains and lots and lots of green. Finding a very tasty chocolate zucchini muffin at Lillian Rock market the next stop called 'dirt on a shirt' was a little bit strange and actually quite scary for me… The next town of Uki was much friendlier. Some pretty good pies, some cute little turtles, a funky mural on the wall and a quirky little bookshop, I bought two just because I liked the covers – tied to the tracks and the electronic elephant (I am hoping this might inspire some African adventures 😉 ). Venturing on, finding Mt Warning in Wollumbin National Park, similar to Uluru the mountain is a sacred place. To the Bundjalung people; who ask you not to climb to the summit. We walked the lyrebird track. Taking us through the trees I learnt about lyrebirds (which incidentally Ben told me a face a 10 cent coin), that the palms in the area were called bangalow's in New South Wales and piccabeen's in Queensland and that the local barred frogs and hip pocket frogs would have a croak off consisting of 'eh eh eh' and 'ok ok ok'. I'd love to hear that ;-). 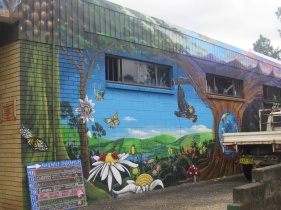 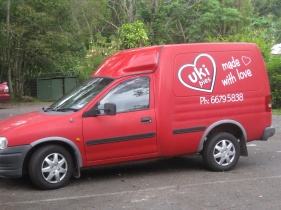 Having a fairly spectacular failure of an attempt at making risotto (note to self: always use risotto rice) we were able to see Nimbin in daylight and sunshine the next morning. Having not really liked the feel of it in darkness, it surprised me with a totally different feel from the night before. We wandered the market, found some funky turtles and learnt of its history in the museum. Overall not quite for me, finding it to have just a little bit too many people in such a small area, it is not one of my favourite stops on our road trip… I still appreciated its story though and in the end, despite some noisy animals, quite liked Granny's farm :-). 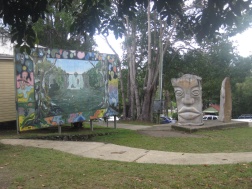 Until next time… Road tripping on 😉