Sharing a dorm with labourers who awake at 5 and a girl that does not go to bed til 4, I have not been sleeping the best this week (the reason i am probably missing the free breakfast!) It very hot in the 10 bed dorm, with the tiny fans the hostel has on offer, I am pretty sure I sweat my entire body weight of water out of me each night. Already having a fitful sleep on friday night, you can imagine my surprise to be awoken when the girl above me, in the middle of the night, took 3 attempts to pull her mattress off the bed, prop the door open with a chair, then proceed to haul it into the tv room to sleep, waking the entire room. On chatting to her in the morning, the words 'oh did I wake you' were met with some disbelief. Whilst I echo her sentiments of sleeping elsewhere, it would have been a bit more reasonable if she hadn't been on a top bunk and hadn't then repeated the act the following two nights…Perhaps a pillow and sheet on the quite comfortable sofa would have sufficed…

Dorm room jenga out of the way, with Moomba on my doorstep I felt this was a situation to be taken advantage of. With water sports and live music on offer, Saturday's viewing consisting of Battleships and Ball Park Music and some new music was added to my 'to buy' list. Propped on the river banks for the nightly fireworks, they were truly amazing. A great atmosphere, finishing the night at the silent disco, happy cooperage place memories surfaced and my Australia bucket list grew after a chat with an interesting Frenchman.

Too tired as a result of the heat, on Sunday I failed to make the free mind, body and spirit class on offer at Moomba. However, I did finally attain free breakfast! Moomba bound again, I was able to catch the birdman rally where people try and fly over the Yarra river in various contraptions. Most failing spectacularly, my particular favourite was the not so aerodynamic sandwich. Camping out under the live music tent to escape the sun, Jackson McLaren & the triple threat band captured the mood of the day perfectly. Knowing my sister would like them, that made me like them all the more. Gossinger next, the singer reminded me of Lissie. A chilled afternoon mellowing, I returned early aiming for an early night. 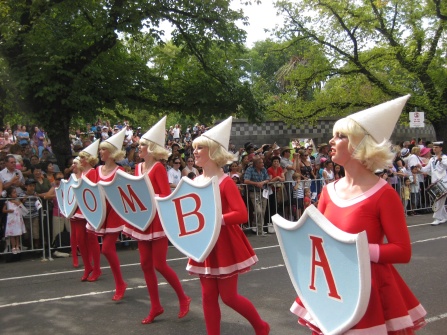 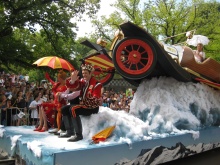 On Sunday, on a roll, another free breakfast was consumed! The Moomba parade starting at 11, I headed to St Kilda Road. Finding a spot halfway along, the parade was colourful and the children did a brilliant job with temperatures at 36 degrees. Some gospel singers singing 'oh happy day', an amazing elephant, a 26 storey tree, fairy tales, a boat of faith and chitty chitty bang bang, there was certainly variety.

So near to the Shrine of Remembrance, I decided to make a dent in my Melbourne Bucket List. Walking up the steps, I got the fright of my life when an 'Oz' like voice informed the area that a 3 minute service was about to start. Standing looking at the marble 'Greater love hath no man' stone in the middle of the room, roof carvings above, with the symbolic light passing over it, I felt surprisingly a bit emotional. Reaching the balcony, a guide called John Williamson shared stories with me, including one about the Australian, Nancy Wake. Known as 'the white mouse', she survived the war despite being one of the most wanted by the Gestapo. My new fact of the day, I learnt that the trenches in WW1 were in fact diagonally edged! 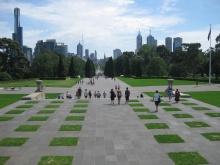 Catching Kunjani at the cultural quarter also, with the glorious sunshine, a happy festival atmosphere was abounding. Great to see live bands, there is a lot of new music to buy! Fireworks viewed for the second time, but this time from the Princess Bridge, we finished our Moomba celebrations. A truly awesome festival, I can't recommend it highly enough if you happen to be in Melbourne in March. 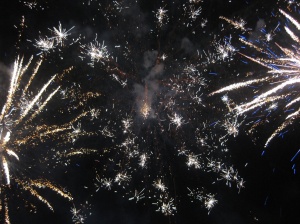